Dressember Kickoff 2015 :: A Lookbook for FREEDOM

Millions of people (children, women, and men) are trapped in slavery in this very moment, whether that be labor trafficking or sex slavery. Estimates range from 2.4 million to 20.1 million. Human trafficking is a $32 billion industry. Because it is an illegal trade, there is no way to measure exactly how many people are forced to work as slaves today. However, research overall estimates that millions of people are in this very moment trapped in the human slave trade. Contrary to many beliefs, human trafficking does not only occur in developing countries, slavery happens in the United States too. Within the United States, human trafficking is found not just in cities, but in suburbs and rural areas as well. What can we do to make a difference? We can raise awareness and know the signs of human trafficking, we can join campaigns to raise awareness and we can raise funds so that organizations can rescue people currently trapped in human trafficking and also offer services to assist survivors after they are taken out of slavery, so that they can move forward and start new lives.

This year my fundraising goal is $400 minimum. Last year I was so focused on my internship, going abroad to teach, and applying to graduate school and scholarships that I only raised $10. Thinking about it, this is less than eating out for dinner once. For those of you who drink Starbucks, even if I'm personally not a fan, that's just two cups! >.< That is an unacceptably low amount for me to have raised. I am set on reaching this goal and going beyond! Freedom is a gift I have been blessed with, and it is a right for all humans.

Thank you so much for joining in the fight to help end human trafficking. If you too are a fashion blogger, or a human being on social media, and want to join in on the campaign, check out the rules here and send me an email so that I can add you to my list of fellow DRESSember bloggers. Lastly, don't forget to check out my blogger sister Safra's Dressember post at Tea N' Hunny! 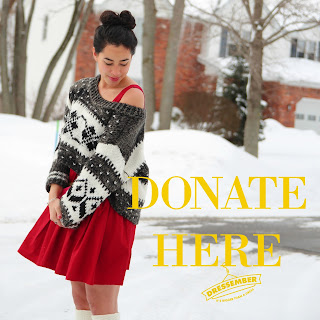 P.S. Safra and I are planning a DRESSember link-up and would love to have you join in. ;)